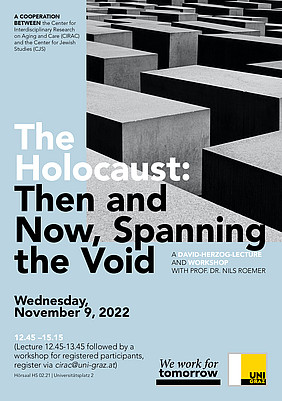 A DAVID-HERZOG-LECTURE AND WORKSHOP WITH PROF. DR. NILS ROEMER

The voids and empty spaces in the Jewish Museum in Berlin evoke destruction and absence. The “Memory Void,” one of the symbolic spaces on the grounds of the museum, which was designed by Daniel Libeskind, recalls the Holocaust as well as the many lives that might have been had the millions of people who died in the Holocaust lived to see another day. In his lecture, Professor Roemer will explore absences and voids as important aspects of remembrance. An awareness is apparent in communal and family remembrances but often obscured in public commemorations in museums and on Holocaust remembrance days. Professor Roemer will develop the theme of absence and advance models of remembrance that view the Holocaust as a past event within the context of an annihilated future. The lecture will be followed by a workshop with students of the University of Graz.

Prof. Dr. Nils Roemer (Ackerman Center for Holocaust Studies, University of Texas at Dallas) Dr. Nils Roemer is the Stan and Barbara Rabin Distinguished Professor at the University of Texas at Dallas. He is also the director of the Ackerman Center for Holocaust Studies and Dean of the newly-formed School of Arts, Humanities, and Technology. He received his MA in 1993 from the University of Hamburg and his PhD from Columbia University in 2000. He has published numerous articles, books, and several co-edited volumes and is also the co-editor of Germanic Review. His special fields of interest are the Holocaust, human rights, and European, German and Jewish cultural and intellectual history.